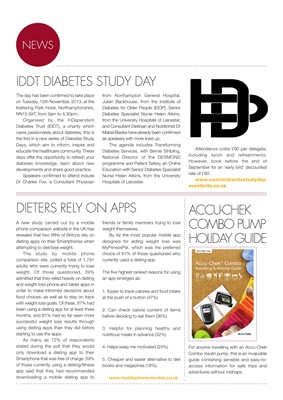 The day has been confirmed to take place from Northampton General Hospital,

on Tuesday, 12th November, 2013, at the Julian Backhouse, from the Institute of

Organised by the InDependent from the University Hospitals of Leicester,

Diabetes Trust (IDDT), a charity which and Consultant Dietician and Nutritionist Dr

cares passionately about diabetes, this is Mabel Blades have already been confirmed

the first in a new series of Diabetes Study as speakers with more lined up.

Days, which aim to inform, inspire and The agenda includes Transforming

days offer the opportunity to refresh your National Director of the DESMOND including lunch and refreshments.

diabetes knowledge, learn about new programme and Patient Safety, an Online However, book before the end of

Speakers confirmed to attend include Nurse Helen Atkins, from the University rate of £80.

A new study carried out by a mobile

revealed that two fifths of Britons rely on

dieting apps on their Smartphones when

By far the most popular mobile app

designed for aiding weight loss was

MyFitnessPal, which was the preferred

adults who were currently trying to lose

weight. Of those questioned, 39% The five highest ranked reasons for using

admitted that they relied heavily on dieting an app emerged as:

and weight loss phone and tablet apps in

order to make informed decisions about 1. Easier to track calories and food intake

food choices, as well as to stay on track at the push of a button (47%)

with weight loss goals. Of these, 87% had

been using a dieting app for at least three 2. Can check calorie content of items

using dieting apps than they did before 3. Helpful for planning healthy and

starting to use the apps. nutritious meals in advance (32%)

stated during the poll that they would 4. Helps keep me motivated (24%) For anyone travelling with an Accu-Chek

only download a dieting app to their Combo insulin pump, this is an invaluable

Smartphone that was free of charge. 59% 5. Cheaper and easier alternative to diet guide containing sensible and easy-to-

of those currently using a dieting/fitness books and magazines (18%). access information for safe trips and

app said that they had recommended adventures without mishaps.