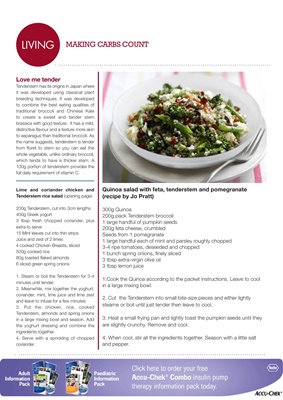 Tenderstem has its origins in Japan where

it was developed using classical plant

breeding techniques. It was developed

to combine the best eating qualities of

to create a sweet and tender stem

brassica with good texture. It has a mild,

to asparagus than traditional broccoli. As

the name suggests, tenderstem is tender

from floret to stem so you can eat the

which tends to have a thicker stem. A

100g portion of tenderstem provides the

Lime and coriander chicken and Quinoa salad with feta, tenderstem and pomegranate

1.Cook the Quinoa according to the packet instructions. Leave to cool

in a large mixing bowl.

2. Meanwhile, mix together the yoghurt,

2. Cut the Tenderstem into small bite-size pieces and either lightly

and leave to infuse for a few minutes.

3. Put the chicken, rice, cooked steame or boil until just tender then leave to cool.

in a large mixing bowl and season. Add 3. Heat a small frying pan and lightly toast the pumpkin seeds until they

the yoghurt dressing and combine the are slightly crunchy. Remove and cool.

4. Serve with a sprinkling of chopped 4. When cool, stir all the ingredients together. Season with a little salt