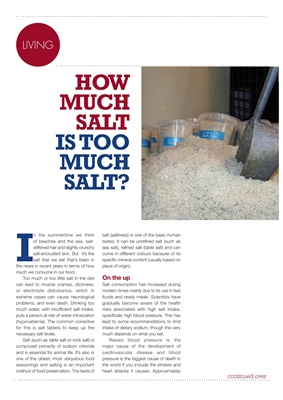 summertime we think of beaches tastes. It can be unrefined salt (such as

encrusted skin. But salt’s been in specific mineral content usually based on

the news in recent years in terms of how place of origin.

much we consume in our food.

can lead to muscle cramps, dizziness, or Salt consumption has increased during

electrolyte disturbance, which in extreme modern times mainly due to its use in fast

cases can cause neurological problems, foods and ready meals. Scientists have

or death. Drinking too much water, with gradually become aware of the health

tablets to keep up the necessary salt intake of dietary sodium, though this very

levels. much depends on what you eat.

composed primarily of sodium chloride major cause of the development of

and is essential for animal life. It’s also is cardiovascular disease and blood

one of the oldest, most ubiquitous food pressure is the biggest cause of death in

method of food preservation. The taste of heart attacks it causes. Approximately