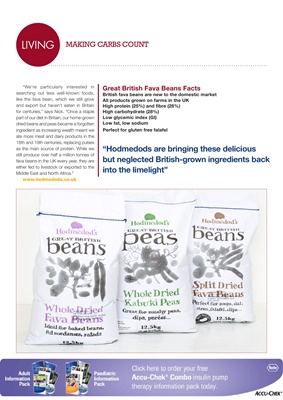 like the fava bean, which we still grow All products grown on farms in the UK

for centuries,” says Nick. “Once a staple High carbohydrate (28%)

part of our diet in Britain, our home-grown Low glycemic index (GI)

ate more meat and dairy products in the

as the main source of protein. While we “Hodmedods are bringing these delicious

still produce over half a million tonnes of

fava beans in the UK every year, they are but neglected British-grown ingredients back

either fed to livestock or exported to the