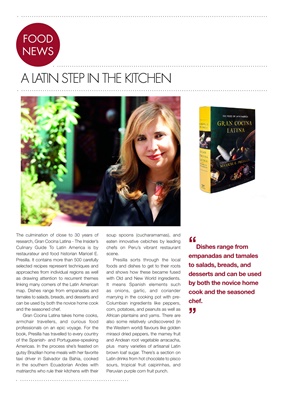 A LATIN STEP IN THE KITCHEN

The culmination of close to 30 years of soup spoons (cucharamamas), and

Culinary Guide To Latin America is by

Presilla. It contains more than 500 carefully Presilla sorts through the local

selected recipes represent techniques and foods and dishes to get to their roots to salads, breads, and

desserts and can be used

as drawing attention to recurrent themes with Old and New World ingredients.

map. Dishes range from empanadas and as onions, garlic, and coriander cook and the seasoned

tamales to salads, breads, and desserts and marrying in the cooking pot with pre-

can be used by both the novice home cook Columbian ingredients like peppers, chef.

and the seasoned chef. corn, potatoes, and peanuts as well as

armchair travellers, and curious food also some relatively undiscovered (in

professionals on an epic voyage. For the the Western world) flavours like golden

book, Presilla has travelled to every country mirasol dried peppers, the mamey fruit

of the Spanish- and Portuguese-speaking and Andean root vegetable arracacha,

Americas. In the process she’s feasted on plus many varieties of artisanal Latin

in the southern Ecuadorian Andes with sours, tropical fruit caipirinhas, and

matriarchs who rule their kitchens with their Peruvian purple corn fruit punch.