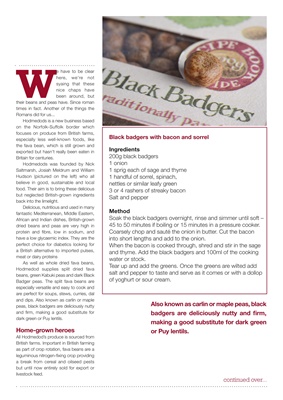 e have to be clear

their beans and peas have. Since roman

times in fact. Another of the things the

Romans did for us...

Hodmedods is a new business based

on the Norfolk-Suffolk border which

focuses on produce from British farms

the fava bean, which is still grown and

exported but hasn’t really been eaten in Ingredients

Hodmedods was founded by 1 onion

Nick Saltmarsh, Josiah Meldrum and 1 sprig each of sage and thyme

William Hudson who all believe in good, 1 handful of sorrel, spinach,

sustainable and local food. Their aim is nettles or similar leafy green

British-grown ingredients back into the

Delicious, nutritious and used in many

dried beans and peas are very high in 45 to 50 minutes if boiling or 15 minutes in a pressure cooker.

protein and fibre, low in sodium, and Coarsely chop and sauté the onion in butter. Cut the bacon

have a low glycaemic index. They are the into short lengths and add to the onion.

perfect choice for diabetics looking for When the bacon is cooked through, shred and stir in the sage

a British alternative to imported pulses, and thyme. Add the black badgers and 100ml of the cooking

Tear up and add the greens. Once the greens are wilted add

beans, green Kabuki peas and dark Black salt and pepper to taste and serve as it comes or with a dollop

Badger peas. The split fava beans are of yoghurt or sour cream.

especially versatile and easy to cook and

and dips. Also known as carlin or maple

and firm, making a good substitute for badgers are deliciously nutty and firm,

All Hodmedod’s produce is sourced from

as part of crop rotation, fava beans are a

a break from cereal and oilseed pests

but until now entirely sold for export or