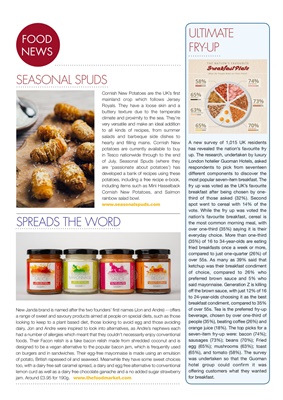 a range of sweet and savoury products aimed at people on special diets, such as those

looking to keep to a plant based diet, those looking to avoid egg and those avoiding

dairy. Jon and Andre were inspired to look into alternatives, as Andre's nephews each

foods. Their Facon relish is a fake bacon relish made from shredded coconut and is

designed to be a vegan alternative to the popular bacon jam, which is frequently used

on burgers and in sandwiches. Their egg-free mayonnaise is made using an emulsion

of potato, British rapeseed oil and seaweed. Meanwhile they have some sweet choices

too, with a dairy free salt caramel spread, a dairy and egg free alternative to conventional

Royals. They have a loose skin and a

buttery texture due to the temperate

climate and proximity to the sea. They're

to all kinds of recipes, from summer

salads and barbeque side dishes to

potatoes are currently available to buy

in Tesco nationwide through to the end

of July. Seasonal Spuds (where they

are 'passionate about potatoes') has

developed a bank of recipes using these

potatoes, including a free recipe e-book,

including items such as Mini Hasselback

has revealed the nation's favourite fry

up. The research, undertaken by luxury

respondents to pick from seventeen

different components to discover the

most popular seven-item breakfast. The

fry up was voted as the UK's favourite

breakfast after being chosen by onethird

spot went to cereal with 14% of the

vote. While the fry up was voted the

the most common morning meal, with

fried breakfasts once a week or more,

compared to just one-quarter (26%) of

ketchup was their breakfast condiment

of choice, compared to 26% who

preferred brown sauce and 5% who

to 24-year-olds choosing it as the best

of over 55s. Tea is the preferred fry-up

beverage, chosen by over one-third of

was undertaken so that the Guoman

hotel group could confirm it was

offering customers what they wanted