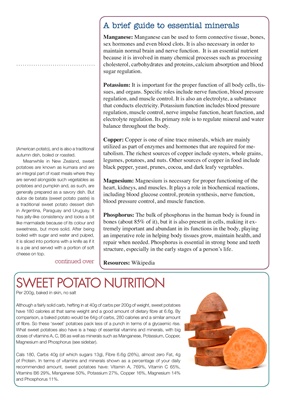 Although a fairly solid carb, hefting in at 40g of carbs per 200g of weight, sweet potatoes

have 180 calories at that same weight and a good amount of dietary fibre at 6.6g. By

comparison, a baked potato would be 64g of carbs, 280 calories and a similar amount

of fibre. So these 'sweet' potatoes pack less of a punch in terms of a glycaemic rise.

What sweet potatoes also have is a heap of essential vitamins and minerals, with big

doses of vitamins A, C, B6 as well as minerals such as Manganese, Potassium, Copper,

of Protein. In terms of vitamins and minerals shown as a percentage of your daily

(American potato), and is also a traditional

potatoes are known as kumara and are

an integral part of roast meals where they

are served alongside such vegetables as

potatoes and pumpkin and, as such, are

generally prepared as a savory dish. But

in Argentina, Paraguay and Uruguay. It

has jelly-like consistency and looks a bit

sweetness, but more solid. After being

boiled with sugar and water and pulped,

it is sliced into portions with a knife as if it

is a pie and served with a portion of soft

A brief guide to essential minerals

Manganese: Manganese can be used to form connective tissue, bones,

sex hormones and even blood clots. It is also necessary in order to

maintain normal brain and nerve function. It is an essential nutrient

because it is involved in many chemical processes such as processing

Potassium: It is important for the proper function of all body cells, tissues, and organs.

regulation, and muscle control. It is also an electrolyte, a substance

electrolyte regulation. Its primary role is to regulate mineral and water

balance throughout the body.

Copper: Copper is one of nine trace minerals, which are mainly

utilized as part of enzymes and hormones that are required for metabolism. The

legumes, potatoes, and nuts. Other sources of copper in food include

Magnesium: Magnesium is necessary for proper functioning of the

heart, kidneys, and muscles. It plays a role in biochemical reactions,

Phosphorus: The bulk of phosphorus in the human body is found in

bones (about 85% of it), but it is also present in cells, making it extremely important and abundant in its functions in the body,

repair when needed. Phosphorus is essential in strong bone and teeth

structure, especially in the early stages of a person's life.