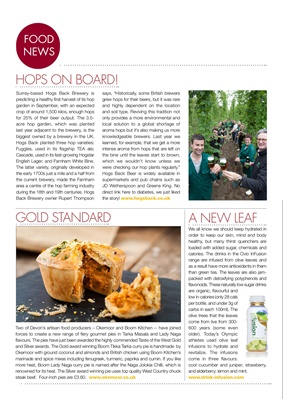 Surrey-based Hogs Back Brewery is

predicting a healthy first harvest of its hop

garden in September, with an expected

hop garden, which was planted

last year adjacent to the brewery, is the

biggest owned by a brewery in the UK.

Cascade, used in its fast-growing Hogstar

The latter variety, originally developed in

the current brewery, made the Farnham

area a centre of the hop farming industry

during the 18th and 19th centuries. Hogs

flavours. The pies have just been awarded the highly commended Taste of the West Gold

marinade and spice mixes including fenugreek, turmeric, paprika and cumin. If you like

more heat, Boom Lady Naga curry pie is named after the Naga Jolokia Chilli, which is

We all know we should keep hydrated in

order to keep our skin, mind and body

healthy, but many thirst quenchers are

loaded with added sugar, chemicals and

calories. The drinks in the Ovio InFusion

range are infused from olive leaves and

as a result have more antioxidants in them

than green tea. The leaves are also jampacked with

drinks are organic, flavourful and low in

calories (only 28 calories per bottle, and

under 3g of carbs in each

that the leaves come from

years (some even older).

hydrate and revitalize. The

and elderberry; lemon and

grew hops for their beers, but it was rare

and highly dependent on the location

and soil type. Reviving this tradition not

only provides a more environmental and

local solution to a global shortage of

aroma hops but it's also making us more

learned, for example, that we get a more

intense aroma from hops that are left on

the bine until the leaves start to brown,

which we wouldn't know unless we

were checking our hop plants regularly."

Hogs Back Beer is widely available in

supermarkets and pub chains such as JD