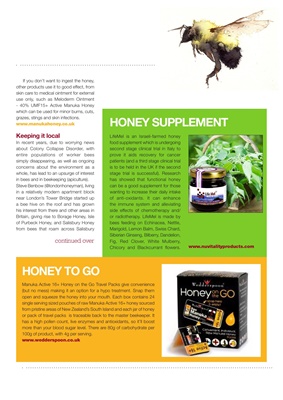 Manuka Active 16+ Honey on the Go Travel Packs give convenience

(but no mess) making it an option for a hypo treatment. Snap them

open and squeeze the honey into your mouth. Each box contains 24

or pack of travel packs is traceable back to the master beekeeper. It

has a high pollen count, live enzymes and antioxidants, so it'll boost

more than your blood sugar level. There are 80g of carbohydrate per

If you don't want to ingest the honey,

other products use it to good effect, from

use only, such as Meloderm Ointment

which can be used for minor burns, cuts,

In recent years, due to worrying news

about Colony Collapse Disorder, with

simply disappearing, as well as ongoing

concerns about the environment as a

whole, has lead to an upsurge of interest

in bees and in beekeeping (apiculture).

in a relatively modern apartment block

near London's Tower Bridge started up

food supplement which is undergoing

prove it aids recovery for cancer

is to be held in the UK if the second

has showed that functional honey

can be a good supplement for those

wanting to increase their daily intake

of anti-oxidants. It can enhance

the immune system and alleviating

side effects of chemotherapy and/

or radiotherapy. LifeMel is made by