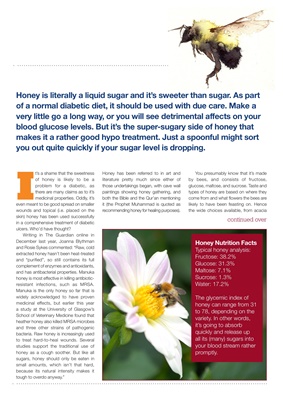 It's a shame that the sweetness

of honey is likely to be a

problem for a diabetic, as

there are many claims as to it's

even meant to be good spread on smaller

skin) honey has been used successfully

in a comprehensive treatment of diabetic

Writing in The Guardian online in

and "purified", so still contains its full

complement of enzymes and antioxidants,

and has antibacterial properties. Manuka

honey is most effective in killing antibioticresistant

infections, such as MRSA.

Manuka is the only honey so far that is

widely acknowledged to have proven

medicinal effects, but earlier this year

a study at the University of Glasgow's

School of Veterinary Medicine found that

and three other strains of pathogenic

studies support the traditional use of

sugars, honey should only be eaten in

small amounts, which isn't that hard,

because its natural intensity makes it

The glycemic index of

honey can range from 31

variety. In other words,

it's going to absorb

quickly and release up

all its (many) sugars into

your blood stream rather

Honey is literally a liquid sugar and it's sweeter than sugar. As part

of a normal diabetic diet, it should be used with due care. Make a

very little go a long way, or you will see detrimental affects on your

blood glucose levels. But it's the super-sugary side of honey that

makes it a rather good hypo treatment. Just a spoonful might sort

you out quite quickly if your sugar level is dropping.

Honey has been referred to in art and

literature pretty much since either of

those undertakings began, with cave wall

both the Bible and the Qur'an mentioning

it (the Prophet Muhammad is quoted as

You presumably know that it's made

by bees, and consists of fructose,

glucose, maltose, and sucrose. Taste and

types of honey are based on where they

come from and what flowers the bees are

likely to have been feasting on. Hence

the wide choices available, from acacia