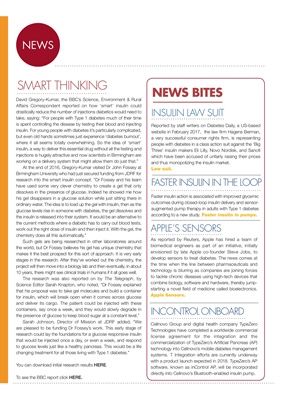 Affairs Correspondent reported on how 'smart' insulin could

drastically reduce the number of injections diabetics would need to

take, saying: "For people with Type 1 diabetes much of their time

is spent controlling the disease by testing their blood and injecting

insulin. For young people with diabetes it's particularly complicated,

where it all seems totally overwhelming. So the idea of 'smart'

insulin, a way to deliver this essential drug without all the testing

and injections is hugely attractive and now scientists in Birmingham

At the end of 2016, Gregory-Kumar visited Dr John Fossey at

Birmingham University who had just secured funding from JDRF for

research into the smart insulin concept. "Dr Fossey and his team

dissolves in the presence of glucose. Indeed he showed me how

ordinary water. The idea is to load up the gel with insulin, then as the

glucose levels rise in someone with diabetes, the gel dissolves and

the insulin is released into their system. It would be an alternative to

the current methods where a diabetic has to carry out blood tests,

work out the right dose of insulin and then inject it. With the gel, the

chemistry does all this automatically."

Such gels are being researched in other laboratories around

the world, but Dr Fossey believes his gel has unique chemistry that

makes it the best prospect for this sort of approach. It is very early

stages in the research. After they've worked out the chemistry, the

project will then move into a biology lab and then eventually, in

about 10 years, there might see clinical trials in humans if it all goes

The research was also reported on by The Telegraph, by

for insulin, which will break open when it comes across glucose

and deliver its cargo. The patient could be injected with these

containers, say once a week, and they would slowly degrade in

the presence of glucose to keep blood sugar at a constant level."

Sarah Johnson, Director of Mission at JDRF added, "We

are pleased to be funding Dr Fossey's work. This early stage of

research could lay the foundations for a glucose responsive insulin

that would be injected once a day, or even a week, and respond

to glucose levels just like a healthy pancreas. This would be a life

changing treatment for all those living with Type 1 diabetes."

Reported by staff writers on Diabetes Daily, a US-based

is a very successful consumer rights firm, is representing

people living with diabetes in a class action suit against

Sanofi which have been accused of unfairly raising their

prices and thus monopolizing the insulin market by the

plaintiffs in the case: people with Type 1 diabetes.

according to a new study. Faster insulin in pumps.

As reported by Reuters, Apple has hired a team of

biomedical engineers as part of an initiative, initially

develop sensors to treat diabetes. The news comes at

the time when the line between pharmaceuticals and

technology is blurring as companies are joining forces

Technologies have completed a worldwide commercial

license agreement for the integration and the

with a product launch expected in 2018. TypeZero's AP

software, known as inControl AP, will be incorporated