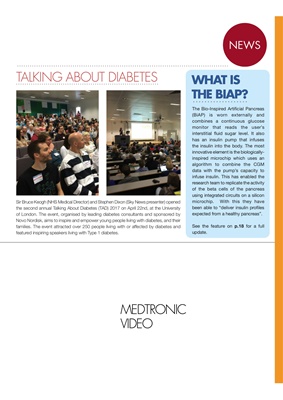 (BiAP) is worn externally and combines

a continuous glucose monitor that reads

also has an insulin pump that infuses

the insulin into the body. The most

innovative element is the biologicallyinspired

microchip which uses an

algorithm to combine the CGM data

with the pump's capacity to infuse

insulin. This has enabled the research

team to replicate the activity of the beta

cells of the pancreas using integrated

circuits on a silicon microchip. With

this they have been able to "deliver

insulin profiles expected from a healthy

See the feature on p.18 for a full update.

the second annual Talking About Diabetes (TAD) 2017 on April 22nd, at the University

of London. The event, organised by leading diabetes consultants and sponsored by

Novo Nordisk, aims to inspire and empower young people living with diabetes, and their

families. The event attracted over 250 people living with or affected by diabetes and