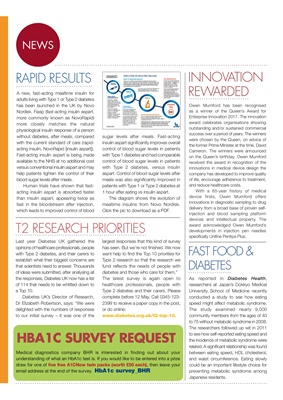 A new, fast-acting mealtime insulin for

has been launched in the UK by Novo

physiological insulin response of a person

without diabetes, after meals, compared

Fast-acting insulin aspart is being made

available to the NHS at no additional cost

versus conventional insulin aspart and may

help patients tighten the control of their

than insulin aspart, appearing twice as

fast in the bloodstream after injection,

which leads to improved control of blood

with Type 2 diabetes, and their carers to

establish what their biggest concerns are

that scientists need to answer. Thousands

of ideas were submitted, after analysing all

of 114 that needs to be whittled down to

Dr Elizabeth Robertson, says: "We were

delighted with the numbers of responses

to our initial survey - it was one of the

largest responses that this kind of survey

has seen. But we're not finished. We now

want help to find the Top 10 priorities for

Type 2 research so that the research we

fund reflects the needs of people with

diabetes and those who care for them."

The latest survey is again open to

Type 2 diabetes and their carers. Please

Owen Mumford has been recognised

as a winner of the Queen's Award for

success over a period of years. The winners

were chosen by the Queen, on advice of

the former Prime Minister at the time, David

Cameron. The winners were announced

on the Queen's birthday. Owen Mumford

received the award in recognition of the new

innovations in medical device design the

company has developed to improve quality

of life, encourage adherence to treatment,

With a 65-year history of medical

innovations in diagnostic sampling to drug

devices and intellectual property. The

Medical diagnostics company BHR is interested in finding out about your

understanding of what an HbA1c test is. If you would like to be entered into a prize

draw for one of five free A1CNow twin packs (worth £50 each), then leave your

email address at the end of the survey. HbA1c survey_BHR

As reported in Diabetes Health,

conducted a study to see how eating

community members from the ages of 40

The researchers followed up wit in 2011

to see how self-reported eating speed and

the incidence of metabolic syndrome were

related. A significant relationship was found

could be an important lifestyle choice for

with Type 1 diabetes and had comparable

with Type 2 diabetes, versus insulin

meals was also significantly improved in

patients with Type 1 or Type 2 diabetes at

1 hour after eating vs insulin aspart.

The diagram shows the evolution of