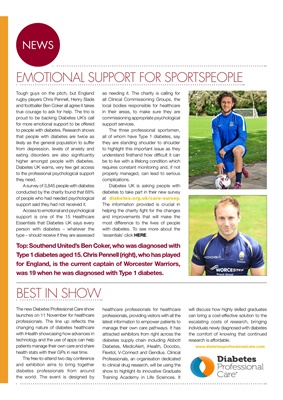 JDRF together with Diabetes UK, Input

Patient Advocacy and the National

Institute for Health and Care Excellence

(NICE) have produced a new guide to

the technology available for helping

to treat Type 1 diabetes. It highlights

new recommendations from NICE on

treatments and technology for people

with Type 1 diabetes. It includes update

on some technologies that NICE hasn't

yet made recommendations on.

wound healing. It means that the treatment may one day help diabetic patients heal

stubborn and painful ulcers on their feet. www.sciencedaily.com

People with Type 1 diabetes who use

less risk of dying from cardiovascular

disease than those who take insulin by

multiple daily injections, according to a

study in the British Medical Journal and

Based on the National Diabetes Register,

While 2,441 of the subjects used insulin

pump therapy, the others relied on

The study found that insulin pump

users had a substantially lower risk of

dying of cardiovascular disease than the

daily injection group. The correlation was

the findings to eliminate the risk of bias

or confounding and concluded that the

believes that one reason for the difference

JDRF researchers in the US have found

that alefacept, a psoriasis drug that targets

the immune system, could help keep

insulin-producing cells safe in people with

Type 1 diabetes. The results come from a

two-year clinical trial of the drug in people

who were newly diagnosed with Type 1.

The results showed that the people in the

A guide for young people and families

between the two therapies is that the

insulin pump method is accompanied by

that insulin pump usage can reduce

the frequencies of severe hypoglycemic

episodes. Severe hypoglycaemia can be

a risk factor for cardiovascular events,

"We evaluated the patients who used

insulin pump therapy and do not know

if the observed effect is attributable to

continuous infusion of insulin or that some

of the effect is attributable to intensified

to control blood glucose, or a better

knowledge about having diabetes type 1"

The researchers have concluded that

insulin pumps not only make life easier for

patients, but represent a safe and effective

trail were making more of their own insulin

than people who did not take alefacept,

despite both groups having had Type 1

for more than two years.

When the researchers compared the

levels of immune cells between the two

groups, people who had taken alefacept

had higher levels of cells that regulate the

that are known to attack the pancreas in

Type 1. It appeared that the drug helped

altering the immune system, reducing its

The results were published in The