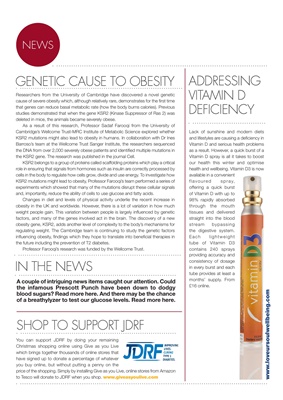 You can support JDRF by doing your remaining

Christmas shopping online using Give as you Live

which brings together thousands of online stores that

have signed up to donate a percentage of whatever

you buy online, but without putting a penny on the

price of the shopping. Simply by installing Give as you Live, online stores from Amazon

to Tesco will donate to JDRF when you shop. www.giveasyoulive.com

Researchers from the University of Cambridge have discovered a novel genetic

cause of severe obesity which, although relatively rare, demonstrates for the first time

that genes can reduce basal metabolic rate (how the body burns calories). Previous

As a result of this research, Professor Sadaf Farooqi from the University of

KSR2 mutations might also lead to obesity in humans. In collaboration with Dr Ines

the DNA from over 2,000 severely obese patients and identified multiple mutations in

the KSR2 gene. The research was published in the journal Cell.

cells in the body to regulate how cells grow, divide and use energy. To investigate how

KSR2 mutations might lead to obesity, Professor Farooqi's team performed a series of

and, importantly, reduce the ability of cells to use glucose and fatty acids.

obesity in the UK and worldwide. However, there is a lot of variation in how much

weight people gain. This variation between people is largely influenced by genetic

factors, and many of the genes involved act in the brain. The discovery of a new

obesity gene, KSR2, adds another level of complexity to the body's mechanisms for

regulating weight. The Cambridge team is continuing to study the genetic factors

influencing obesity, findings which they hope to translate into beneficial therapies in

Professor Farooqi's research was funded by the Wellcome Trust.

GENETIC CAUSE TO OBESITY

Lack of sunshine and modern diets

and lifestyles are causing a deficiency in

as a result. However, a quick burst of a

Vitamin D spray is all it takes to boost

our health this winter and optimise

available in a convenient

of Vitamin D with up to

straight into the blood

www.loveursoulwellbeing.com A couple of intriguing news items caught our attention. Could

the infamous Prescott Punch have been down to dodgy

blood sugars? Read more here. And there may be the chance

of a breathylyzer to test our glucose levels. Read more here.

in every burst and each

tube provides at least a