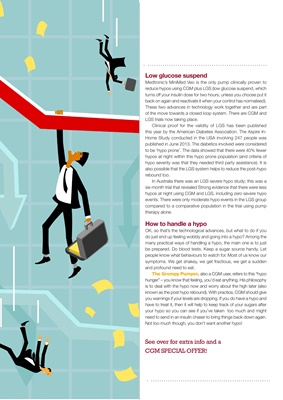 by the American Diabetes Association. The Aspire In-Home

Study conducted in the USA involving 247 people took place in

June 2013. The diabetics involved were considered to be 'hypo

prone'. The data showed that there were 40% fewer hypos at

night within this hypo prone population (and criteria of hypo

severity was that they needed third party assistance). It is also

possible that the LGS system helps to reduce the post-hypo

In Australia there was an LGS severe hypo study; this was a

six-month trial that revealed Strong evidence that there were less

events. There were only moderate hypo events in the LGS group

compared to a comparative population in the trial using pump

How to handle a hypo

Among the many practical ways of handling a hypo is pretty

much to just be prepared. Do blood tests. Keep a sugar source

handy. Let people know what behaviours to watch for.

Most of us know our symptoms. We get shakey, we get

fractious, we get a sudden and profound need to eat. The

Grumpy Pumper refers to hypo hunger - you know that feeling,

you'd eat anything. His philosophy is to deals with the hypo now

and worries about the high later (also known as hypo rebound).

It helps to keep track of your sugars after your hypo, in that way

again. Not too much though, don't want another hypo!

Among the hypo treatments available are these three

of carbohydrate, each sugar releasing one after the other into

your blood stream to save on too big a load in one go). It comes

in different flavours and is available on prescription. GlucoTabs

in tablet form comes in orange and raspberry flavours as well

as their sibling, GlucoGel, which comes in different flavours too.